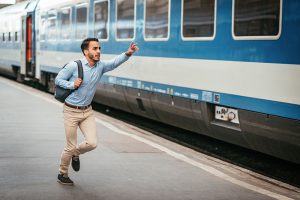 Recently we have had a number of year 5 pupils struggling with worded mathematical questions. Pupils have often got into the habit of looking at Maths purely as a series of calculations. They have learnt addition and subtraction followed by long multiplication and long division purely as a number operation. Introduce a worded functional element and the student is stuck.

The worded question does not tell the pupil what the mathematical operation is going to be. So break this question down into the important parts as a starting point.
• First of all underline the numbers in the question as you know that Maths is going to involve some form of number manipulation.
• Next ask the student to picture the scene. You are “late” for a train and arrive “after” the train has left.
• Look at a clock in the room and ask the pupil to think about 10 minutes later. Then ask what mathematical process gets you to 10 minutes later. The pupil will choose from +, -, x or / and recognise that the 10 minutes must be added to 08:48.
• Next ask the pupil to continue to add from 08:58 to move the time to 10:25. They should do this in easy to calculate chunks. eg. + 2 minutes to 09:00, + 1 hour to 10:00, then +25 minutes to 10:25. Total waiting time is 1 hour 27 minutes.
• Do not allow the subtraction of 08:58 from 10:25 as they will do this in column format and get the wrong answer by forgetting there are 60 minutes in the hour.

Maths is all about problem solving and we need to get students to see how to use Maths rather than just learning to calculate by method. Our year 5 pupils are given weekly 10 minute worded problem tasks. The better the problem solving skills the better the mathematician.