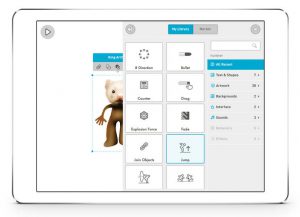 This interesting article about code and simple coding is a great follow-on to the article by Conrad Wolfram that we published a few weeks ago. There is no doubt that computers play a big part in all our lives and this is likely to continue and increase for young students now at school.

This article written by Ben Schiller was first published on fastcoexist.com – it is written in American English.

Ready wants to democratize programming by making it simple enough to create a game that people with no coding experience can do it.

Code runs the world, but coding today isn’t for everyone. Generally, it’s still done by a select group of mostly male, math-literate programmers, and the rest of us are just consumers rather than participants in code’s production.

Could that be about to change? The media theorist Douglas Rushkoff thinks so. He’s been championing a new iPad app called Ready that he thinks marks an important shift in our relationship with software.

“The distance between using your computer and programming your computer has gotten wider and wider,” he says. “I’ve been discouraged that most portals to being a digital creator have involved these really difficult coding languages that require you to be at a certain level of sophistication in mathematics. Ready has a really simple interface that lets people have the experience of programming something for themselves.”

Ready, which is now being used at middle schools and summer camps, is based on the Unity game engine. It has simple drag-and-drop controls, allowing users to pull in objects and quickly give them “physics.” For example, you can create a Pong-like game in a few minutes (see below), animate a panda so it’s jumping through a hoop or moving toward an owl, or create a game where characters are battling for supremacy.

Al Doyle used Ready to teach sixth-graders at the Dwight International School, on the Upper West Side last year. The students created a game where two characters try to avoid each other while picking up food to stay healthy. “Because the interface is drag-and-drop, the students can move around code and see their results immediately. They can also remix other people’s projects and have a sense of trial and error that’s really powerful,” he says.

Ready is the brainchild of David Bennahum, a former writer with Wired. He sees the platform as opening up code-making and making it easier to teach. “We’re at a moment now in the 21st century where it’s simply not okay that people can’t create the media of their time,” he says. “And if you look at why that is, it’s got a lot to do with how we make software. It’s just extremely inaccessible for most people to learn, and it’s been that way for 50 years.”

School systems have ambitious plans to teach code to youngsters. New York, for instance, wants to bring computer science to all its 232 public schools in the next academic year. However, it’s questionable, argues Bennahum, how much students can really learn using old approaches. “One of the hugest obstacles to expanding this kind of literacy is that teachers themselves have to be adept at coding. It’s just unrealistic to expect teachers to learn this whole new thing, or that coders are going to quit high-paying jobs and come and teach in schools. It’s just not happening,” he says. 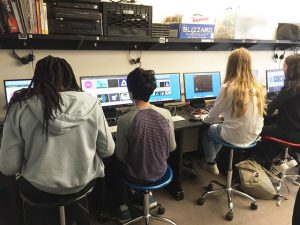 The basic version of Ready is free, but to use Ready in the classroom, schools will have to budget for the paid-for version. It includes administrative controls (so teachers can track what a whole class is doing), allows teachers to supplement the default library of content with their own material, and for teachers to set up dedicated web pages so they can showcase student projects. Bennahum says teachers can start teaching Ready after six hours of training, and he offers several lesson plans for them to teach how to make basic games to students.

Does it matter that students never go near C++ or HTML? Rushkoff argues not. It’s more important that people are creative than technical, he says, and in any case something like Ready doesn’t stop people from learning full coding if they want to. Actually, they may be more inspired to do that, once they realize that it is necessary for creating completely new programs.

“I understand there’s an orthodoxy this violates, but the democratization of code could be huge,” Rushkoff says. “This is to code what Windows was to DOS. When that came out, people said ‘oh but they won’t know where their AUTOEXEC.BAT file is.’ Well, there’s a certain level of knowledge that [students] are going to miss out on. But they’re going to gain in other ways.”

Bennahum says Ready is only the start of the democratization process. At the moment, you can only create 2D content—the sort of games you get on your smartphone. But, he says, future versions will allow 3D and virtual reality for Oculus and HoloLens. “You have to walk before you can run, but ultimately we see people submitting projects to an app store under their own name, like they were using Photoshop to manipulate a poster in some awesome way.”

N.B. The Ready app doesn’t appear to be available in the UK yet.