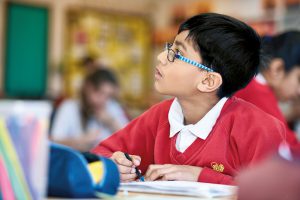 We thought this article about falling in love with numbers would be of interest. It was first published on www.teachwire.net and was written by Prof Mike Askew of the University of Witwatersrand, Johannesburg.

Prof Askew referenced a maths hero of his, Alfred North Whitehead. He mentioned Whitehead’s famous book, The Aims of Education suggesting that much of Whitehead’s writing is still pertinent today. He particularly liked his claim that “no system of external tests which aims primarily at examining individual scholars can result in anything but educational waste”.

He also liked his model that learning involves three dimensions: precision, generalisation and romance but sees the stages as interwoven and iterative.

In love with numbers: Precision

Attention to precision in numbers should not be conflated with drilling pupils in singular procedures: working flexibly and precisely involves choosing methods and strategies depending on the calculation to hand.

For example, given 4005 − 3998, one pupil might mentally calculate by counting on from 3998 to 4005, or another by partitioning 4005 into 4000 and 5 to figure out that the total difference must be 2 + 5 = 7. These approaches are more effective (and less error prone) than reaching for paper and pencil to carry out a vertical calculation.

In love with numbers: Generalisation

Sound learning in mathematics rests on generalising. It is important that teaching goes beyond a focus on whether or not pupils get correct answers, and instead encourages them to justify their solutions by explaining how they arrived at the answer and whether their approach will always work.

Understanding mathematical generalisations come about through the act of generalising: it is not enough to simply tell pupils, say, that addition and subtraction are inverse operations, they have to come to that awareness through exploring operations, articulating their insights and repeatedly applying them.

Being able to generalise is not a developmental ‘stage’ that children grow into following an emphasis on precision, rather it is a mindset promoted by classroom environments and tasks that go beyond simple right/wrong solutions.

In love with numbers: Romance

Is it possible to be romantically entangled with maths? Mathematicians seem to think so. Gauss reported being ‘seized’ by mathematics and Bertrand Russell (incidentally a student of Whitehead’s) claimed, “I had not imagined there was anything so delicious in the world. From that moment until I was 38, mathematics was my chief interest and my chief source of happiness.”

These sentiments are equally likely to have been expressed towards a love interest. Romance involves, among other things, being in the moment with the other – presence – and playfulness, two aspects that Askew thinks contribute to encouraging pupils to ‘fall for’ mathematics.

Visiting a Y6 class, Askew sat next to a boy working on finding two different ways to fill in the blanks on:

This is an example of what the writer Eleanor Duckworth might call a ‘wonderful idea’ in her argument that intellectual growth arises out of learners, at every level of development, having their own, unique, wonderful ideas.

It had not occurred to Askew that the instruction to give two solutions could be interpreted as meaning each solution had to involve the same product, but coming up with that showed that the boy was thinking about how to interpret the mathematics, not just plugging in numbers to get a solution.

Open-ended challenges such as this provide the opportunity for wonderful ideas to emerge and is linked to both the teacher and the pupil being ‘present’, both to each other and to the mathematics.

The core of Duckworth’s pedagogical philosophy is “to listen, to have our learners tell us their thoughts” and that, in turn, requires treating the content as explorable and open to different interpretations.

Such a pedagogy of listening challenges teaching mathematics based on direct instruction, where the teacher first models what to do and learners then have to reproduce this.

But how does opening things up in this way tie in with precision? Don’t pupils have to know that 2 + 2 = 4 and not think that it could be 3 or a banana? Well, yes and no.

Pour two glasses of water into a jug, followed by another two and you don’t end up with four glasses of water. Or take this example: what could be the answer to 17 ÷ 5? Three, three remainder two, three and two fifths, four… These could all be sensible answers, depending on whether one is considering:

Lots of evidence indicates that being playful facilitates learning, creativity, and problem-solving. Peter Gray has extensively researched and examined the power of play in learning and argues that engaging in abstract, hypothetical thinking depends on being able to enter into imaginary situations, something that ‘every normal child exercises regularly in play’.

Given that mathematics arises out of abstract, hypothetical thinking, tapping into children’s propensity for play would seem to be a necessity.

Teachers who encourage a playful approach to mathematics report that pupils often don’t want to stop when the lesson ends, but instead want to continue to explore the ideas being played with. And it is through play that we discover talents and interests.

We are not suggesting play guarantees all pupils will get hooked on maths, but it is likely to help more pupils find that they have a taste for numbers and want to continue playing with it. Even pupils with other interests may come to appreciate the breadth of mathematics, since, as Whitehead puts it, “You cannot evade quantity. You may fly to poetry and music, and quantity and number will face you in your rhythms and your octaves.”

A playful approach towards teaching and learning mathematics involves a free exchange of ideas – the play of mathematical dialogue. Playfulness promotes a mathematics-centred classroom, where ideas are welcomed, held up to be examined, built upon and refined. It is through playing with ideas that depth of understanding comes about.

Take an example like: 22 + 25 = [ ] + 24. Precision might involve adding 22 and 25 and then figuring out what to add to 24 to make 47. Moving towards generalisation, pupils could be asked to articulate what these equations are all examples of:

Pupils may notice that these are all examples of compensation – that increasing one number in a sum has to be compensated by decreasing the other by an equivalent amount if the sum is to remain the same. A playful approach would go beyond this to ask questions like, ‘Does this always work? What about large numbers? Fractions? Decimals?’

What about three addends? How does this extend to subtraction?

One of Whitehead’s chief concerns was how to avoid teaching what he called ‘inert’ knowledge: “The problem of keeping knowledge alive, of preventing it from becoming inert… is the central problem of all education.” A good balance of precision, generality and romance can go a long way to keeping mathematics alive and helping students fall in love with numbers.