The article below prompted us to have a discussion at Tuition First HQ about the quality of the handwriting amongst our students, (and ourselves!!). We’ve also been talking to Early Years teachers about their experience of handwriting too. 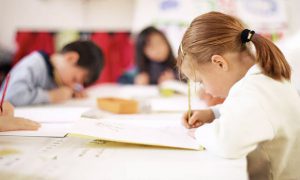 Our conclusion: handwriting skills have diminished; so we’re making an effort to improve them …

We do take a hard line, with our students studying English, to write legibly, to spell correctly and to use punctuation. However, spelling and writing legibly also impacts on subjects like Geography and History and counts towards 5% of the marks in both of these subjects. (You’ll often hear us say….. “If the examiner can’t read your writing, they won’t be able to mark your work and therefore you may throw marks away”).

Our English students have been writing to persuade and argue and we have seen some fabulous poems, stories, speeches and press releases… we’re looking forward to the formal and informal letters next week and the scripts for plays after Easter.

The same can be said of maths too – if the numbers are illegible the calculation will be marked as incorrect.

As parents, you can also help your children to improve by encouraging them to write thank you letters, instead of sending an email or text, (especially if the letter is to someone from the older generation). Remember the feeling of joy that a letter brings as it comes through the letterbox?

Encourage younger children to draw pictures, paint and colour – these will all help develop the muscles needed to form letters and write legibly. (Our Early Years teachers also recommended that young children get out on the monkey bars in the park to help develop the rotator cuff muscles in the shoulders – it’s proven to help with writing skills – who’d have thought!!)

The following article appeared in The Guardian on 7 March 2018 authored by Harriet Swain:

Technology is having an impact on children’s handwriting ability. But what does this mean for learning and development?

Cast your mind back to the most recent thing you’ve written. Maybe it was a document for work, a message to a friend, or a simple shopping list. Did you a pen? Or did you type it?

The decline of writing by hand – particularly among young people and children – has been in the news. Last month, paediatric doctors warned that children were finding it difficult to hold pencils due to excessive use of technology. Letters to Santa are increasingly sent by email, and Cambridge University is piloting the use of laptops instead of pen and paper for selected exams after requests from students. Some academics have noted the “downward trend” in students’ handwriting.

But what of the role that handwriting plays in learning and development? And with technology changing how we live and work, what place does handwriting have in the modern classroom? These were the questions put to the teachers, academics and specialists in education and technology at the Guardian’s roundtable event on 27 February. The roundtable was supported by the Write Your Future campaign from Berol and Paper Mate.

The delegates noted with interest that everyone at the table had chosen to use pens, not laptops, to make notes. One reason for this could be that writing plays a social role in our lives, said Dominic Wyse, professor of early childhood and primary education at UCL and incoming vice-president, president elect of the British Educational Research Association (BERA). Having a laptop open would be rude in such circumstances, he argued – and he would find it more difficult to engage.

The level of engagement involved in writing by hand is important, said Diana Strauss, co-founder of Write Dance Training, which helps children develop their handwriting skills through music. She pointed to recent research carried out in France in which one group of adult learners was told to write notes while another typed them. Those writing by hand were later found to have a deeper level of learning.

Ros Wilson, founder of Andrell Education’s Big Writing model for teaching writing, described the process of handwriting as “creating a mental picture of the world” and said computer processing did not create the same picture in the brain.

This is why teachers encourage children to draw in the sand or water, which embeds learning in the early years, noted Naveed Idress, headteacher of Feversham Primary Academy in Bradford. “You never know what an A is unless you’ve physically drawn it.”

In terms of writing in schools, there was agreement that increasing use of computers in university assessments could have a knock-on effect lower down the education system. “One of the concerns is that if you put high-stakes tests onto a computer it changes what schools have to prepare children for,” said Jane Medwell, associate professor at the University of Nottingham and consultant for the Write Your Future campaign. Encouraging children to concentrate on using computers too early might not be in their best interests in terms of development.

Angela Webb, a psychologist and chair of the National Handwriting Association, explained that engagement with the physical environment activated certain areas of the brain and stimulated cognitive development, so picking up a pen has a positive impact not just on literacy but on other disciplines too.

One example of this is the way that it helps to develop the muscles needed to sit at a desk for long periods, said Strauss. She said learning to write by hand aided physical coordination, rhythm, stamina and posture. Secondary school students are at risk of physical problems later in life if not taught to sit and write properly.

Wyse said that while he would like to see children taught to touch-type early in school, it was rare to find children who had formed their first words on a keyboard. But educators should also be careful not to teach handwriting before students were physically ready, argued Jonathan Rodgers, primary advisory teacher for the Centre for Literacy in Primary Education. He criticised the “rush to mark-make, or to write when they should be mark-making before they have actually been squeezing things and climbing things and hanging from things”.

Idress agreed that handwriting should be part of children’s holistic development. One way his school helped itself out of special measures was by focusing on music, which helped build focus and readiness to learn in the children. He believes handwriting gives children similar skills to those gained through music – resilience, creativity and the ability to interact socially. “We are not just talking about mechanical skills here,” he said. “We are talking about how children learn. We are making them ready for life.”

Nina Iles, head of EdTech at the British Educational Suppliers Association, said it was important to balance digital and written awareness and for children to be able to express themselves creatively through technology and writing. “The key is learning to do it well,” she said. “Sometimes if a child is struggling with their handwriting, that can be a barrier to them being able to use it effectively to inform and express themselves.”

Delegates agreed it was important to achieve “automaticity” – the ability to get letters down automatically – to free up the brain to focus on creativity. But for Guy Merchant, professor of literacy in education at Sheffield Hallam University, this can take place with a keyboard or touchscreen just as well as with a pen.

Helen Boden, chief executive of the British Dyslexia Association, said touch-typing can give dyslexic children the kind of automaticity they struggle with when learning to write by hand. Some are wary of putting marks on paper that would be a permanent symbol of their difficulties and are more comfortable with a tablet or computer where making corrections is easier.

Technology can also help those with little or no English to interact with their classmates, said Hana Emami, primary school project manager at the National Literacy Trust. Yet she warned that not all young people have good access to computers in their schools or at home, meaning too much emphasis on technology could set up educational inequalities.

Teachers can sometimes be wary of technology because it doesn’t always fit with their idea of what educational success is, said Boden. But Merchant insisted digital literacy was essential, especially in a world where means of communication are rapidly diversifying.

So is there a balance to be struck in how we teach children to write? For Idress, this is key: making sure we help children choose the right tool for the task in hand – whether that’s a pen, a laptop, or something else.

Jane Medwell, associate professor, University of Nottingham, and consultant to the Write Your Future campaign from Berol and Paper Mate

Angela Webb, psychologist and chair of the National Handwriting Association